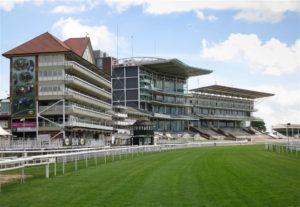 Left, the winner, Mr Sandeep Jaiswal. Right, view of the York Racecourse which hosted the Exhibition

On the 15th – 16th July 2016 the York Racecourse hosted the exhibition organised by Stamp World Exhibitions, on behalf of The Association of British Philatelic Societies.  So, no horses but stamps were admired in this occasion.

All FIP Classes together with Cinderella and Picture Post Card Classes were accepted.

This National Competition was open to all exhibitors in the United Kingdom, and to exhibitors from other FIP and FEPA affiliated countries. As many as 95 Stamp Dealers were present.

Mrs Yvonne Wheatley very kindly sent us the following information about the awards:

The Best in Show and Large Gold Medal was awarded to Mr Sandeep Jaiswal with British India – Queen Victoria Postal Stationery.  An in depth study of Victorian postal stationery with special emphasis on errors and varieties and unusual and extraordinary usages.

Gold medals in the Traditional Class were awarded to Mr Jon Aitchison – Identifying the Seventeen Printings of the first Herm Island issue, the ‘Nautical Chart’ Stamps.

Dr Richard Hobbs with British Propaganda Envelopes of the 19th Century  and Mr Stan Lawrence with The elaboration of the Gibraltar 1977 definitive – the ‘Nature’ set.

In the Postal History Class Prof Peter Chadwick gained a Gold Medal for Handstruck Chargemarks of the Official London Posts.

Lastly in the Postcard Class Mr Colin Hoffman received a Gold Medal for The Early Postcards of Rhodesia in the undivided back era.

Thank you Yvonne for your excellent collaboration and congratulations to the winners!

3 Days Symposium on Postal History in Carinthia
Scroll to top