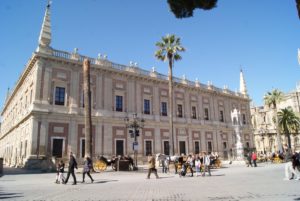 The General Archive of the Indies, in Seville, UNESCO World Heritage building, hosted the Symposium

Amongst the events of the FEPA Exhibition “EXFILNA – ECC 2018”, on the 3rd of November were held at the “Archivo General de Indias”, in Seville, a cycle of conferences in front of a numerous and interested  public coming from Spain, Colombia, Argentina, Panamá, Portugal, France, Netherlands, Sweden and Germany amongst others countries. Organized by the Spanish Federation FESOFI, with the Patronage of the Spanish Post “Correos” and the collaboration of the National Dealers Association “ANFIL”. 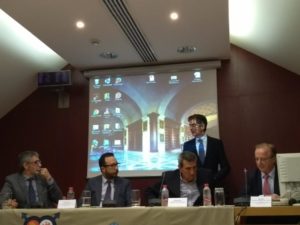 The lecturers were presented by the FEPA President, José Ramón Moreno and its conferences were of such high interest that most would have needed much more time to accomplish the wishes of the public present.

The speakers of the Postal History Symposium “Spain-America, 500 years of Postal Relations” were:

-Jesús Sitja, President of the Royal Spanish Academy of Philately and Postal History “The beginnings of the Royal Rates of the Spanish Post in América (1764-1769)”

-Manuel Arango, from the Colombian Federation of Philatelic Societies, “Pre-philately of the new Kingdom of Granada”.

-Francisco Piniella, from the Spanish Federation of Philatelic Societies. “The Commercial Company of the Maritime Post Office of Havana or the decline of the colonial postal system”

-Manuel Álvarez, from the General Archive of the Indies. “The postal documentation in the Archivo General de Indias” 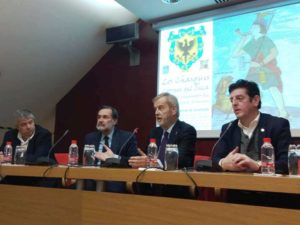 From left: Mr. Santiago Cruz, President of the Philatelic Federation of Colombia, Mr. Manuel Ravina, Director of the “Archivo General de Indias”, presenting the lecturer and Mr. Eugenio de Quesada who made the presentation “The Chasquis, Post of the Inca and the Viceroyalties of Peru and New Granada”

This series of conferences on Postal History were completed by Mr. Eugenio de Quesada who spoke about “The Chasquis, Post of the Inca and the Viceroyalties of Peru and New Granada” product of his own outstanding research, while Mr. Esteve Domenech made his excellent presentation “The value of Postal History: A proposal for dialogue”. 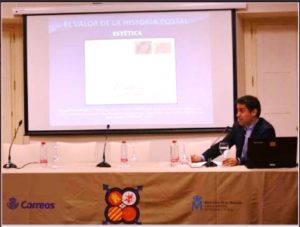 Mr. Esteve Domenech in his interesting lecture  “The value of Postal History: A proposal for dialogue”