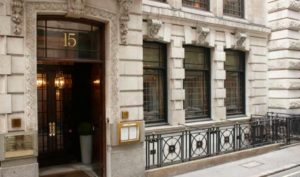 One hundred years since the purchase of its legendary headquarters at 41 Devonshire Place, London W1, The Royal Philatelic Society London is moving to new and larger premises in the historic centre of the City of London at 15 Abchurch Lane, London EC4N 7BW.

Membership of the Society now stands at almost 2,400. This, together with the continuing growth of the Society’s collections, means that the facilities at 41 Devonshire Place are no longer large enough nor serve the needs of members.In late 2016, the Council of the Society took the decision to buy a larger, convenient, characterful new home in central London. The search was led by Chris King, Past President of the Society, who took almost a year to find the new building. He said:

‘When we saw 15 Abchurch Lane we knew that we had found the right place. Better still, every member who has seen it, agrees that this is the place for us.’

Work is now well underway to complete the move by June 2019, which also marks the 150th anniversary of The Royal Philatelic Society London, the world’s oldest and most prestigious philatelic society. Property Consultant, Gerald Eve, is managing the project on behalf of the Society and City architects, Tate Hindle, is leading the redesign of the building.

The final and most important priority is to ensure that all the necessary finances are in place. The Society’s President, Patrick Maselis, is leading the ‘Tomorrows Royal’ fundraising campaign. His overriding objective is to ensure:

‘The Society will continue to grow, develop and prosper in the next 100 years as it has in the last 150’.

The Royal Philatelic Society London, established in 1869 as The Philatelic Society, London, is the oldest philatelic society in the world. It became ‘Royal’ when His Majesty King Edward VII granted the privilege in 1906, ten years after his son, HRH The Duke of York, became President of the Society. When the Duke became King George V in 1910 he continued to act as its Patron and in 1924 granted the Society permission to use the Royal Arms on its stationery and publications. This patronage has been continued to the present day by Her Majesty The Queen.

Congress of the Union of Philatelists of Russia: Sergey EVTUSHENKO elected new...
Scroll to top