At present some of us may feel that the instructions to maintain 2 metres distance from other people and to avoid gathering in groups are a unique imposition, even if necessary to combat the epidemic. However, they have a long history.  As an example, a colleague drew my attention to the Orders issued by the Lord Mayor and Aldermen of the City of London in 1665 to combat plague.

That all plays, bear-baitings, games, singing of ballads, buckler-play, or such-like causes of assemblies of people be utterly prohibited, and the parties offending severely punished by every alderman in his ward.

Feasting prohibited. That all public feasting, and particularly by the companies of this city, and dinners at taverns, ale-houses, and other places of common entertainment, be forborne till further order and allowance; and that the money thereby spared be preserved and employed for the benefit and relief of the poor visited with the infection.

Despite these measures the London plague lasted for 18 months and around 100,000 people died. 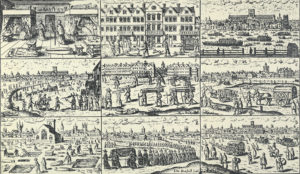