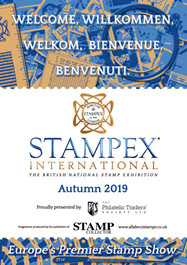 STAMPEX is now badging itself as STAMPEX International, The British National Stamp Exhibition, and it is emphasized on the front of the catalogue with the words: Welcome, Willkommen, Welkom, Bienvenue, Benvenuti. The theme for the show was aviation with the Court of Honour showing Brian Asquith’s collection ‘Faster than a Bullet – The Concorde Story, celebrating the 50th anniversary of Concorde’s first flight.

Among new initiatives at STAMPEX, a series of special talks took place throughout the four days, starting on Wednesday with Bill Hedley, Chairman of the ABPS Exhibitions and International Committee, explaining how to exhibit competitively. This was followed by Matt Hill of Stamp Collector magazine talking to leading philatelists Frank Walton and Chris King, both past presidents of the Royal Philatelic Society London and exhibitors with several Large Gold medals at international level. Questions about their collecting background and philatelic expertise were answered with humour and self-deprecation. On Thursday Stuart Aitken, Curator of Philately at The Postal Museum took the audience on a journey celebrating the 100th anniversary of transatlantic airmail, reflecting the theme of the exhibition, while Friday’s talk by Oscar Young from Stanley Gibbons explained why stamps are issued, how to spot errors, and quirks in printing. The traditional talk on Saturday morning before the awards ceremony, was given by Peter McCann from the USA, a former member of the FIP Board, an experienced exhibitor and international judge. His presentation took its background in Postal History, but of course how to understand ‘Treatment’ in an exhibit is equally relevant to all exhibiting classes, but also in any write-up or display at local clubs and societies. It was followed with a lively Q&A session.

Another new initiative was Exhibition Tours organised by The Philatelic Traders’ Society and the ABPS. The tours took place on Thursday and Friday, lasting about 30 minutes, and led by philatelic experts walking around the exhibits, a good way to engage both experienced exhibitors, stamp enthusiasts, and possible future exhibitors.

With more than 80 trade stands there were great opportunities to look for and find new material, there were information stands, and of course The Royal Mail which launched an exclusive D-Day miniature sheet to honour those who helped secure peace in Europe. Nine specialist societies and study circles held meetings on Saturday, andthe Stamp Active Network attracted many young collectors to their activities in the Gallery Bays, where laughter and excitement could be heard all over the hall. 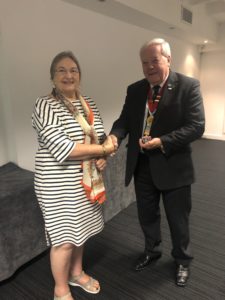 The FEPA Golden pin is presented to Graham Winters, Chairman of the ABPS, by FEPA Director, Birthe King

Immediately prior to the awards ceremony, Birthe  King, FEPA Director, presented the FEPA Golden Pin to Graham Winters, the Chairman of the Association of British Philatelic Societies (ABPS).

As has become a tradition there were exhibits both in the competitive and non-competitive classes with 56 exhibits in the competitive section, including four Literature exhibits. For the first time in the UK all classes recognised by the FIP as well as the national Ephemera Class were invited. The high quality of the exhibits was evidenced in the awards with 13 Large Gold, 10 Gold, 16 Large Vermeil, 12 Vermeil, three Large Silver, one Silver, and one Silver-Bronze. 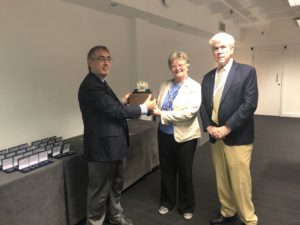 Simon Richards, the winner of the Best in Show, receiving the Silver Mail Coach from Christine Earle with Peter McCann

The Best in Show award, the Silver Mail Coach, was presented to Simon Richards for The Postal History of Savoy 1636-1875.

The next STAMPEX will be in the autumn of 2020 from 30 September to 3 October at the Business Design Centre. There is no Spring STAMPEX, due to the International Exhibition, LONDON 2020 2-9 May, also at the BDC.

The preparations for the Multilaterale Luxemburg 2019 International Exhibition...