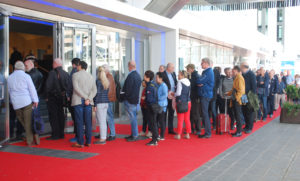 When STOCKHOLMIA 2019 closed its doors on Sunday 2 June, the six days together count 7,832 daily visitors from 51 different foreign destinations. 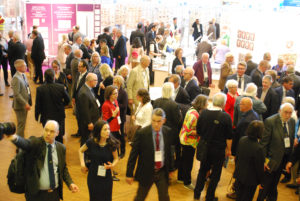 Stockholmia 2019 WAS officially opened by His Majesty King Carl XVI Gustaf of Sweden. The inauguration ceremony started at 11 am with a short introduction by Exhibition Manager Jonas Hällström RDP FRPSL. 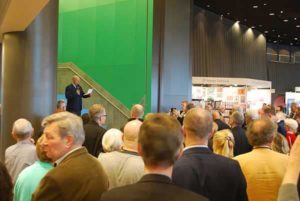 The President of RPSL Patrick Maselis RDP FRPSL followed with a speech characterized by respect, gratitude, honour – and humour. He invited the King to the floor receiving a unique gift: a replica of the Swedish Royal Crown made in chocolate. Then the inauguration speech was held by King Carl XVI Gustaf. The King, for example, mentioned that both his father and grandfather were stamp collectors so philately is a part of the family history. 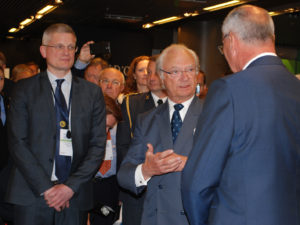 After the ceremony, His Majesty was taken on a tour, with Jonas Hällström as a guide, to the Global Philatelic Network Mega Stand, the Court of Honour, the Royal Philatelic Society London’s large area with many display cabinets, PostNord and stamp dealer Michael Chipperfield. The tour concluded at the Stockholmia Club with some other very special gifts handed over to the King. 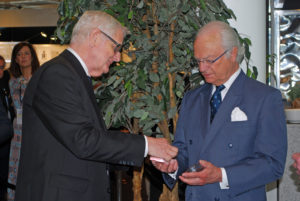 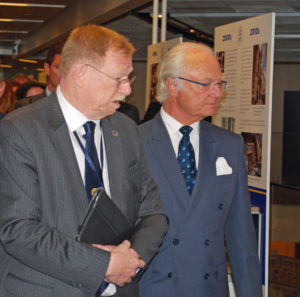 Chris King RDP FRPSL showed King Carl XVI Gustaf along the cabinets with artefacts from and information about the RPSL history, and to the frames with The Roll of Distinguished Philatelists. 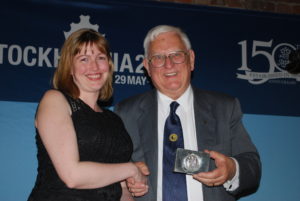 At the end of the evening at Winterviken Stepen D. Schumann RDP FRPSL, as a representative for Trustees and members of the Committee of Westpex, presented the RPSL Museum of two awards from the Philatelic Exhibition of 1900 in Paris and the New York Exhibition of 1913, plus a donation of $3000 to the Royal. The happy receiver is Nicola Davies, Librarian and Interim Head of Collections.

An important event on Friday afternoon was the signing of The Roll of Distinguished Philatelists, established in 1921 by the Philatelic Congress of Great Britain. 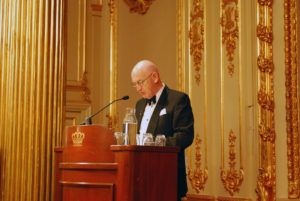 Jon Aitchison FRPSL Keeper of the Roll of Distinguished Philatelists. 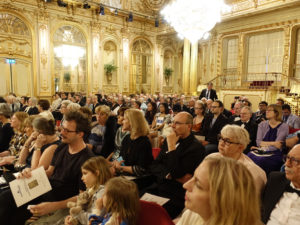 The Ceremony took place in the beautiful Spegelsalen (Mirror Hall) of the Grand Hotel in Stockholm and was open to public.

An invitation to sign the Roll is regarded as the world’s pre-eminent philatelic honour.

This year four esteemed philatelists had been invited to sign The Roll: 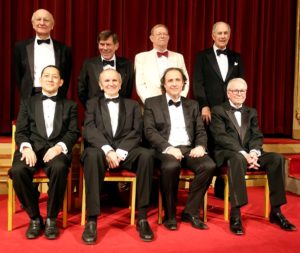 Prakob Chirakiti FRPSL Thailand. He is a specialist in the philately of Thailand and the secretary of the Grand Prix Club. He is the president of the Federation of Inter-Asian Philately executive committee for 2017-2021.

Guy Dutau FRPSL France. He is a specialist in the postal history of disinfected mail.

Hany Salam Egypt. He is a specialist in the postage stamps and postal history of Egypt and has been secretary general of the Philatelic Society of Egypt.

Alan Warren FRPSL USA. He has received the Lichtenstein Medal. He is a specialist in the postage stamps and postal history of Scandinavia.

Every day day were plenty of Seminars  and interesting meetings 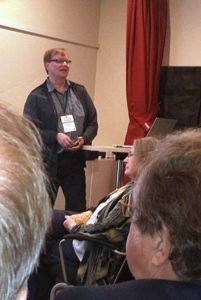 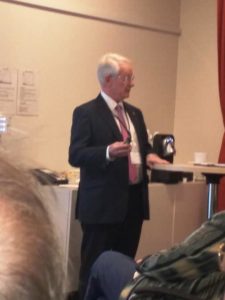 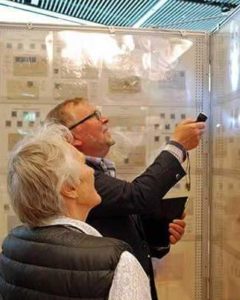 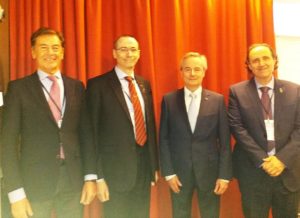 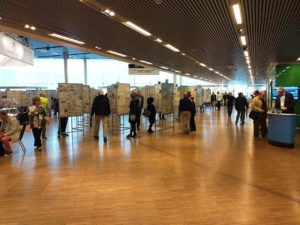 Many visitors went everyday into the Waterfront Congress Center to enjoy the exhibition. 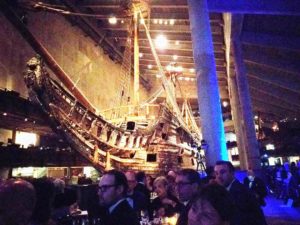 Tables for 700 guests were placed alongside the 1628 ship for the Palmarés and Banquet in the Vasa Museum. 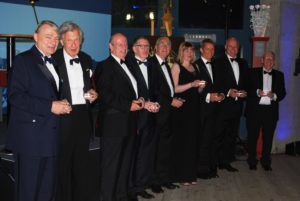 The President of RPSL Patrick Maselis RDP FRPSL presented the prizes to the 8 Best of each Class: 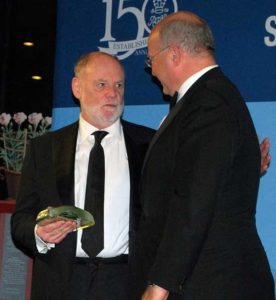 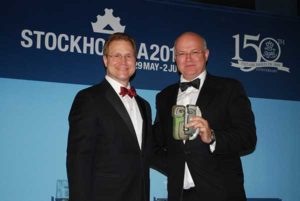 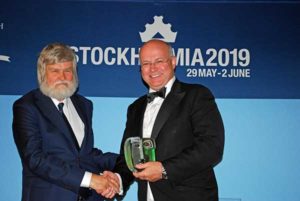 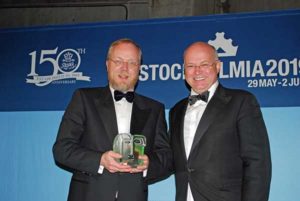 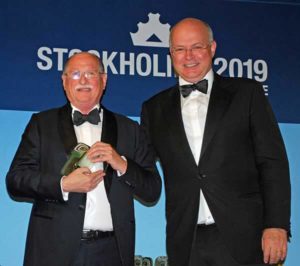 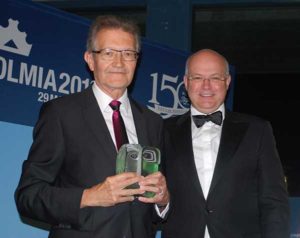 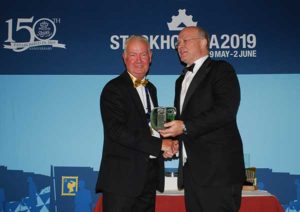 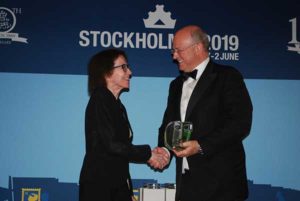 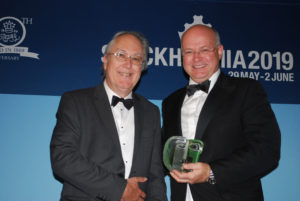 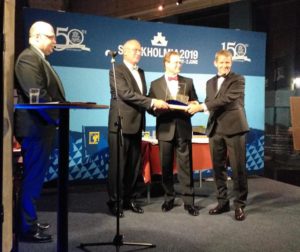 The winner was A Country Divided: Effects of the American Civil War on the Mails, Daniel Ryterband, the United States of America. The Grand Award was presented to Daniel Ryterband by Karl Louis FRPSL and Dieter Michelson FRPSL of The Global Philatelic Network. 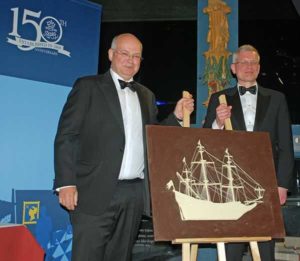 Exhibition Manager Jonas Hällström RDP FRPSL was met by strong applause when he was called to the stage to receive the gilt Exhibition Medal and a personal gift from the President Patrick Maselis RDP FRPSL: “a chocolate version of the VASA ship because I know you have a fascination for ships” as the President said.

“World of Revenues” : The largest number of Revenue exhibits in...

Presentation of the FEPA Certificate to Mr. Jeffrey Stone
Scroll to top