Blog - Latest News
You are here: Home1 / Updates2 / The Spring STAMPEX 2019 has been the successful beginning of the Royal...

STAMPEX is organised between the Philatelic Traders’ Society Ltd, which deals with the trading stands, and the Association of British Philatelic Societies, which arranges the philatelic exhibitions consisting of both competitive and non-competitive displays. This year the lead society was the Royal Philatelic Society London on the topic of King George V material, where members showed 35 competitive exhibits and 25 displays. The excellent catalogue for this part of the show was produced as a supplement to the The London Philatelist with participating members from Cyprus, France, Germany, India, Italy, New Zealand, Pakistan, Saudi Arabia, the USA, and the UK, including a great display from the Society’s own collection. This was the beginning of the Society’s 150th anniversary, which will be followed by a celebratory lunch in London 10 April, then STOCKHOLMIA 2019 and many local celebrations, finishing with LONDON 2020. 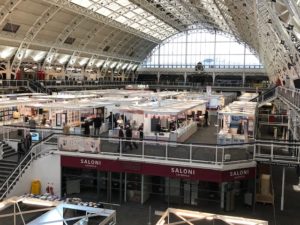 The ABPS national competition had attracted 13 Traditional Philately exhibits, three Postal History, one Postal stationery, 6 Revenues, four Thematic, one Aero, two Open Philately, three in the national class of Ephemera, and 6 in Philatelic Literature. The quality of the exhibits was of a high quality as can be seen from the awards: 14 Large Gold medals, 12 Gold, 32 Large Vermeil, 19 Vermeil, four Large Silver, one Silver, and one Silver-Bronze. 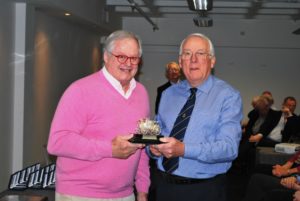 The winner of ‘Best in Show’ was awarded to Patrick Flanagan from South Africa for his ‘The George V Southern Rhodesia 1924 First Definitive Issue’. He is seen here to the left with the Silver Mail Coach trophy presented by Richard Stock, President Elect of the Royal Philatelic Society London.

Immediately prior to the awards ceremony, Richard Stock, President Elect of the Royal Philatelic Society, gave an amusing and knowledgeable talk on ‘How to …a PowerPoint’, including many useful tips for both new and experienced presenters. Such seminars have become a tradition and are free for all to attend.

The STAMPEX catalogue was produced by the publishers of STAMP Collector and sponsored by Stanley Gibbons. The 91 stands, including postal administrations, the Postal Museum, and information stands, so there was a lot of material to choose from for the many philatelist to visit hoping to find a bargain or an elusive item.

A small Court of Honour celebrated Valentine’s Day with four frames of beautiful Valentine’s cards, some dating back to the 18th century, and two frames showing the correspondence between a husband and his wife, separated during the 1864 War between Denmark and Prussia.

The Royal Mail joined in the RPSL 150th celebrations by issuing a limited edition ‘Stamp Classics’ miniature sheet recreating a classic stamp from each reign going back to Queen Victoria.

Fourteen local societies and study groups held meetings on Saturday, the last day of the how, while Stamp Active Network had their own display with activities on the theme of ‘Britain at War’.

Autumn STAMPEX will be held 11-14 September at the Business Design Centre in Islington, London. This is a national exhibition, and exhibitors from abroad are welcome to participate, www.abps.org.uk

“The Lord of the stamps”
Scroll to top