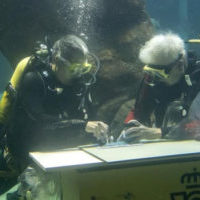 The 57th National Spanish exhibition had this year the Czech and German Federations as guest’s participants. It was held from the 6th to the 10th November 2019. The motto has been ‘Immerse yourself in the immensity of philately’. At the exhibition opening, the special stamps and HB issued by the Spanish Post “Correos”  were postmarked under the water by four divers at the huge aquarium of the Cantabrian Maritime Museum.

EXFILNA 2019 has been organized by the Spanish Federation of Philatelic Societies (FESOFI), and the Cantabrian Philatelic Federation (FEFICA), under the Honorary Presidency of SS.MM. the Kings of Spain and with the sponsorship of the Spanish Post “Correos” , the FNMT- Royal Mint and the Santander City Council. Its headquarters were the Plaza Porticada and the Central Library of Cantabria.

Since 1964, the Spanish Federation of Philatelic Societies (FESOFI), organizes every year EXFILNA rewarding the best Spanish philatelic collections and in this year competing with the participations of Germany and the Czech Republic to whom we thank for accepting our invitation. 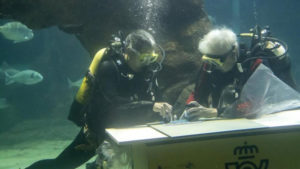 Correos carried out the first postmarked underwater at the aquarium of the Cantabrian Maritime Museum where different species live, including sharks.

The Vice-president of Cantabria, Pablo Zuloaga, and the director of the Museum, Gerardo García-Castrillo, have been two of the divers who have carried out the first underwater postmarked in history, organized by Correos at the Cantabrian Maritime Museum . The envelopes were adapted to overcome the technical difficulties of using ink under salt water. 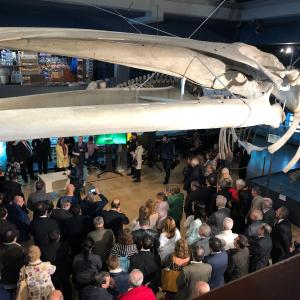 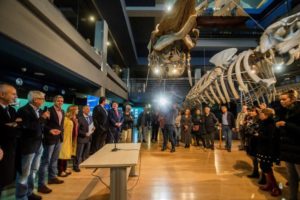 Opening Ceremony at the Cantabrian Maritime Museum, with the skeleton of an enormous whale in the foreground.

The logo has been devoted to one of the icons of Santander, the “Raqueros”. This is the name given to the young boys who dived the objects that fell into the sea of the crew and passengers of the English ships that united the United Kingdom with Santander in the 19th century and early 20th century. These young boys fished and spent the day on the pier, bathing naked or half-naked. People threw coins at them for the children to take out by diving from the bottom of the sea. 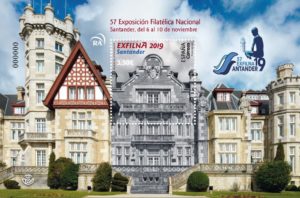 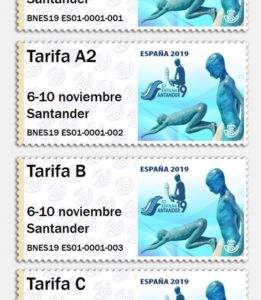 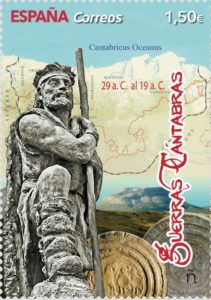 On the occasion of this exhibition, the Spanish Post has issued two new commemorative stamps related to the place where it is celebrated. Are devoted, in addition to the Palace of La Magdalena, to the Cantabrian wars, years 29 B.C. to 19 B.C. after what the Roman Empire fullfilled the domination in Spain.  Also issued postal labels for the different rates with the image of the statues of the “Raqueros” placed at the Santander port. 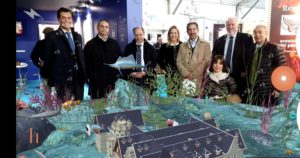 The stamp of the Palace of La Magdalena is a chalcography that shows in detail its facade, with a block sheet that adds an acetate with marine elements taken from an image of the Maritime Museum aquarium, which makes it possible to see this building as if it were under the sea. The Palace was the place where the Spanish Royal family spent the summer at the beginning of the 20th century. Also it adds the technique of augmented reality and through an application you can access underwater animations. 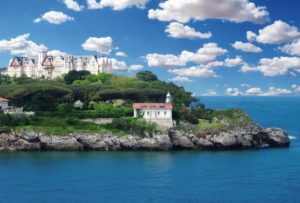 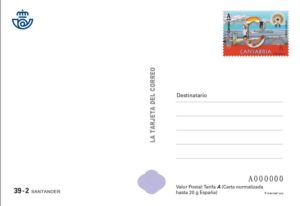 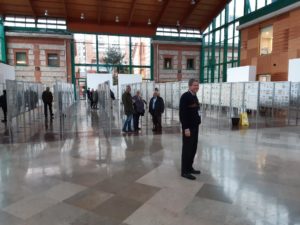 View of the exhibition. We can recognize Michel Pedrero and family, from France, and Thomas Höpfner from Germany 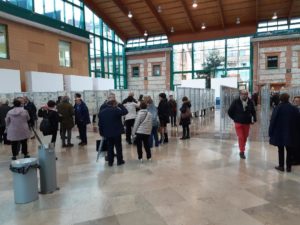 The exhibition was always busy with over 5000 visitors 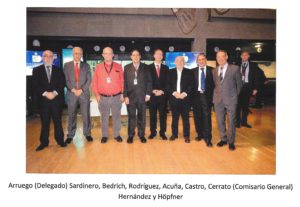 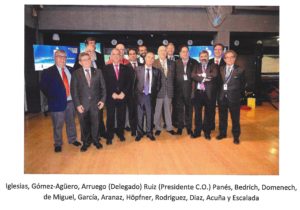 There were a number of events on occasion of the EXFILNA. Above, Modesto Fraguas, Gaspar Martínez and Pedro Navarro presented  the book “Magallanes – Elcano, a philatelic adventure”, commemorating the 500 years of the first circumnavigation of the World

Presentation of the 5th volume of the Library of Studies of  “El Eco”. This volume was devoted to the Traditional Philately, being presented by its Editor, Eugenio de Quesada 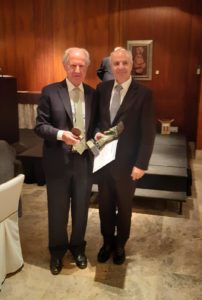 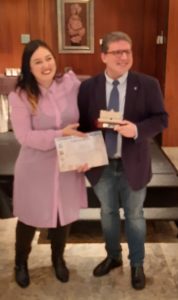 Left photo: The Grand Prix EXFILNA 2019 was for José Alberto Barreras for his exhibit “Revenues of African Colonies”. Jose Alberto Barreras received his medal and trophy from Modesto Fraguas, Director of Philately of the Spanish Post. Right picture: The Grand Prix of the Championship Class was for Juan Antonio Llácer for his exhibit “Valencia 1566-1875”. In the photo the Councilor for Culture and Sport of the City of Santander, María Luisa San Juan presented the award. 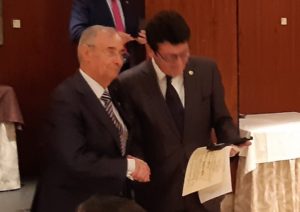 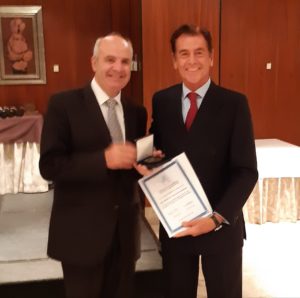 Modesto Fraguas Herrera, Director of Philately of the Spanish Post received the FEPA Medal 2018 for Exceptional Support to Organised Philately. In the photo receiving the Medal from the FEPA President, José Ramón Moreno