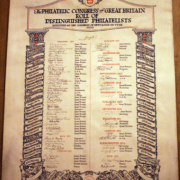 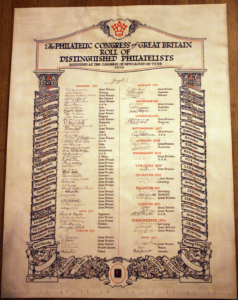 The Board of Election of the Roll of Distinguished Philatelists has invited five eminent philatelists to sign the Roll. They are:

We are delighted that they have been awarded this recognition for their great achievements and send our warmest congratulations to them all.

As 2021 is the centenary of the first signing of the Roll of Distinguished Philatelists in Harrogate, Yorkshire, this year’s signing will also take place in Harrogate in September.

Two other names will also be added to the list of ‘Fathers of Philately’ on the Roll. They are Alfred Moschkau (1848-1912) from Germany and Victor Suppantschitsch (1838-1919) from Austria. This aims to correct a historic injustice that occurred when, in the aftermath of the First World War, no German or Austrian names were included although there were many deserving candidates.

The Press Release issued by the Board of Elections is at:

Museum of Philately is looking for collections to display