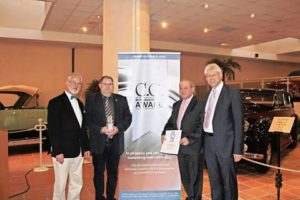 At the recent Monacophil were presented the Christoph Gärtner International Promotion Award 2017.

The first prize was for the Collectors Club of Chicago for its U.S. Contract Mail Routes by Railroad (1832-1875).

2nd Motivgruppe Musik e.V. for “Der Musikus” , the Bulletin of the Group.

The Special Prize  Digital was for Wolfgang Maassen

The Special Prize Youth was for the Meininger Briefmarkensammlerverein e.V.

In total the Christoph Gärtner International Promotion Awards 2017 donated 8.550,00 Euros to the winners. To see all details about the reason for every prize, the points received and the amount obtained by each of the awardees, click here.

Sad News: Paolo Vollmeier has passed away
Scroll to top