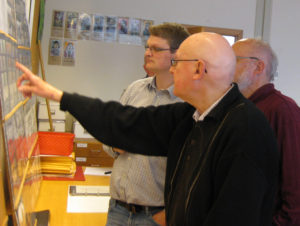 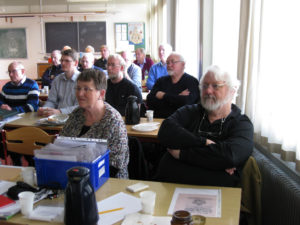 The philately and stamps collecting in Denmark is performed by the member clubs in the Danish federation. In the federation there are (2015) 100 clubs with 4.500 members.

Over the period 1987-2015 the DFH has had lectures by all major Danish philatelists as Take Buntzen, Hans EhlernJessen, JörgenJörgensen, Toke Nörby and Henrik Mouritsen.

The DFH was established in 1987 by visionary philatelists on Djursland from four different local stamp clubs. DFH is a dynamic college/high school that seeks to develop philately according to future needs and current trends among Danish philatelists.
Every year on eight Saturdays in the period September-April (a high school day every month) there are two lectures of 2 hours – morning and afternoon:

School consists of 8 high school days (Saturdays – 4 before and 4 after Christmas) during the season. These days held according to the same concept.

The lectures are primarily about the Danish postal history, but there are often foreign philatelists visiting as teachers, performing postal history of their own countries.

Additionally there are subjects which goes from Traditional over Thematic to Open Philately. There have been detailed political philately subjects as “exhibition and exhibitors”, “the future for philately” and practical concerning “how to manage your exhibit” and so on.

The high school is held at the public school in a little town called Mørke (Mörke means darkness). The slogan is freely translated “Come to Mörke – and see the light”!

In 2012 the high school celebrated its 25-year anniversary, and it continues. In 2015 the DFH had 38 members, who turn up for the lectures. It is mainly exhibitors and the high school is supported by the Danish College of Philatelic Judges. The program is sent out every year to member clubs of the Danish federation and to interested philatelists/exhibitors.

The DFH is led by enthusiastic volunteers, of which there are still three left of the original group, who established the school.

Efforts throughout the many years has contributed to the fact that this event has become a “must” for the danish philatelists on high level and an “official acknowledgement” of their skills to make their lectures on DFH.

DFH also organizes biennial regional exhibitions, and until 2014 the high school had its own high quality philatelic library, now sold to the Danish federation.

DFH is an example to be followed everywhere in Europe. This project may encourage upcoming exhibitors to succeed the current in European countries, where the exhibition rate goes down. It’s for free use.

President of The Danish Philatelic Federation