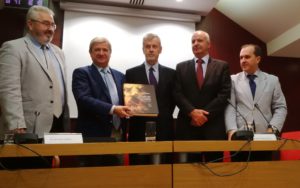 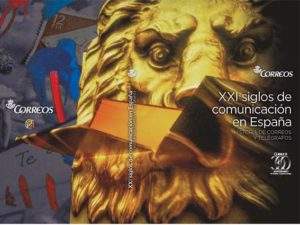 Left photo. From left José María Sempere, co-author and coordinator; Javier Cuesta Nuin, President of the Spanish Post; Manuel Ravina, Director of the “Indies Archive” who hosted the presentation; Modesto Fraguas, Director of Philately of the Spanish Post, and José Manuel López Bernal, co-author and coordinator. Right photo, the cover of the book. 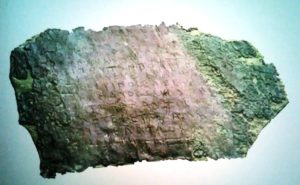 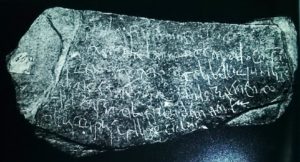 Letters from the Roman Empire: left written on lead found in Ampurias and right  letter over slate stone, era of Romulus Augustus, found near Caceres.

The State Company “Spanish Post and Telegraphs, S. A.” turned three hundred years of existence on the last 8th of July. First as an income to the Crown, and later as a State public service. However, the history of the mail is much older, dating back to the earliest civilizations and staying over time, as you can see in the pages of this book. Undoubtedly, the mail, and at the time the telegraph, have been and are one of the central elements of the configuration of a state and a nexus of social cohesion, considered essential for the function of the country. Throughout its history, we can see its influence in different areas of social and political life, as we now have mobile phones or social networks. And it is that the principles on which the communicative act is based have not changed, although the methods used have been transformed to the beat of the technological revolution. In full awareness of our labour of our history, we approach our tercentenary with satisfaction of having given an institution, the best of itself in resources and infrastructure and, above all, with people who, generation after generation made it possible for the company to work and do it with human and professional vocation of service to the citizens.

For all this baggage, coinciding with the commemoration of our third anniversary, we wanted to publish this book “XXI centuries of communication in Spain” which chronicles of the evolution of postal and telegraphic services in Spain since the beginning of civilization until today and how the State Society has managed to fulfil the task entrusted, being promoter and protagonist of many of the milestones of social and economic development of our country.

We expect that through an extensive graphical display symbiosis occurs between words and image to facilitate the understanding of the work, making it an informative and entertaining text that catches the lector immerse in this exciting adventure in the magic of making 300 years of communication possible.

Throughout the chapters we move into the forms and uses of these services at different times: the Antique Ages, when  the Romans created the first postal systems in the Peninsula; the Middle Ages, where kings, councils, universities and traders had developed the epistolary activity; the Modern Age, in which the Spanish postal system was created, which for two centuries play mainly members of the family Tassis. At this time the post was also incorporated to the Crown as a public income from 1706, naming ten years after Don Juan Thomas Goyeneche was nominated Superintendent and General Manager of the Post of these kingdoms. Continues the Contemporary age, at which point the liberal state, which is reinforced and supported by the mail and the telegraph, to fulfil the needs of the society and contribute to the born of the modernization of the country. Not missing the chapters of the mail with America for four centuries, carrying the mail from one side to another of the ocean, facilitating the governance and interactive between cultures. The birth of philately, national organizations, and its peculiarities. And of course, the main protagonists of this story: the professionals, men and more recently women, who in the past have enabled over three centuries the operation of mail and telegraph, sometimes with a very high price ; those who now look at our future with proud  feelings of accomplishment and which now are the engine of change that drives this company, young heirs to the best tradition, which make it possible for this institution to be recognized as it was in past time by the whole society.

Attempts have been made to the reach rigor in the content of the book with the events of the past and present. That is why we have paid special attention to the selection of the most reliable and renowned authors. It had the participation of teachers and professors of history from various universities such as the Complutense of Madrid, the University of Alcala de Henares or the Politecnica of Madrid, as well as with leading researchers from the Royal Hispanic Academy of Philately, an institution that focuses its activity towards the study of philately and postal history.

Of course, they have also been part workers of this company, who have dedicated their time to study and research on the history of the mail and the telegraph, as those responsible from the Postal and Telegraph Museum, the Library of the Post as well as those of the Unit the Documentation and Historical Studies who has coordinated the edition. To all of them, the State Company “Spanish Post and Telegraphs, S. A.”  wants to congratulate and thank them for their admirable realization of this publication, which we wanted to convey the sense of transformation that has characterized this institution in its work over XXI centuries, whose goal has been and will continue to serve the great human goal of making communication possible through physical, digital or any other elements that the future may bring. Our will is to continue uniting transformation, innovation and permanence, and provide quality service and coverage to Spain also in the next XXI centuries.

President of the Correos Group