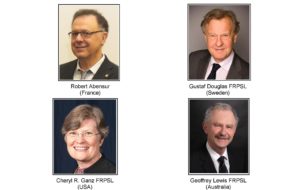 The Roll of Distinguished Philatelists was established in 1921 by the Philatelic Congress of Great Britain with the approval of His Majesty King George V, who was the first Signatory. An invitation to sign the Roll is regarded as the world’s pre-eminent philatelic honour.

Not including the newly elected RDPs, 380 philatelists from 40 countries have achieved this distinction. There are at present 78 Signatories from 26 countries including sixteen from the United Kingdom, fourteen from the USA, seven from Germany, four each from France, and Belgium, and three each from Australia and Italy. Denmark, New Zealand, Norway, Singapore, and Thailand each have two, with other countries including Austria, Canada, Colombia, Finland, Greece, Israel, Japan, Korea, Luxembourg, The Netherlands, Portugal, The Russian Federation, and Switzerland, having one.

The Signing Ceremony will take place on Friday 27 July at The Assembly Rooms in Newcastle upon Tyne, during the Philatelic Congress of Great Britain.

Robert Abensur lives in Pont-à-Mousson in North East France. He has researched widely and fulfilled all the requirements needed for a signatory to the Roll of Distinguished Philatelists. His main collecting and researching areas are the postal rates and regulations of France and Alsace-Lorraine. His latest book published in 2017 is The Franco-Sardinian route in international relations (1818-1851) and his articles on various subjects number well over a hundred, in France and elsewhere.

He has been President of the Académie de philatélie since 2002 and was awarded the chevalier dans l’ordre des Art et des Lettres in 2009, gained a Large Gold medal at FEPA 2015 for Maritime Mail between France and foreign countries. Routes and Rates 1828-1849 and has organised many philatelic meetings and exhibitions in France.

Gustaf Douglas is of Swedish nationality and has formed what are considered to be the most complete collections of both Sweden and Finland in existence.

His monographs are always of the highest standard and he has attained Gold and Large Gold medals in international exhibitions since 1971. He co-authored Sweden Number One, in 2005. He was awarded the Tilleard Medal of the Royal Philatelic Society London as well as the Strandell Medal, the highest philatelic recognition in Sweden, in 2014 and is presently working hard as Head Patron for Stockholmia 2019.

Always modest, charming and helpful to fellow collectors, he is a most worthy candidate to sign the Roll.

Cheryl Ganz of the United States of America is best known for her lifelong philatelic outreach at local, national, and international levels, engaging a vast spectrum of collectors from specialists to new audiences. Her collections, exhibits, research, and writing, and speaking focus primarily on her specialty of zeppelin posts.

Philatelic recognitions include the Smithsonian Philatelic Achievement Award, Luff Award for Exceptional Contributions to Philately, Alfred F. Lichtenstein Memorial Award for Distinguished Service to Philately, American Air Mail Society Research Award, and Single Frame Champion of Champions. She has written and edited books, articles, and online content, putting philately in a wider context to reach larger audiences without sacrificing philatelic scholarship. Her service to organized philately is multi-faceted in a variety of positions of influence and accomplishment.

Altogether hers is a very fine achievement, and she rightly deserves to be a signatory of the Roll.

Geoffrey is an Australian resident of Randwick, a suburb of eastern Sydney, New South Wales, Australia where he has lived for the whole of his life. His collections have included the postal history of Spanish Philippines, that of Cuba, of New Orleans and Stampless Mail entering Spain. He has won FIP Large Gold medals in Postal History with exhibits on the subject matter of each of the three continental areas: Asia, Europe and the Americas.

In 2013 he attained a Large Gold Medal for his well-written study entitled The 1836 Anglo-French Postal Convention – a difficult subject to cover in a readable form.

Program of the WSC Israel 2018
Scroll to top